Glenfiddich, the World’s Most Awarded Single Malt Whisky, has unveiled the Grande Couronne, the newest addition to the Grand Series. Grande Couronne is a 26 Year Old whisky matured in American and European oak casks at the Glenfiddich Distillery in Dufftown, Scotland, before the crowning glory – an extended finish of up to two years in meticulously sourced French Cognac casks – providing a true taste of elegance.

In honour of this new release, Glenfiddich presents a collaboration with contemporary Kenyan artist WiseTwo. The artist reimagines the Grand Couronne’s luxury filigree design with a limited-edition custom sleeve. Reflecting the unexpected marriage of two luxury worlds – a blend of Scottish heritage and French opulence– Kenyan born WiseTwo (Bhupi Jethwa) pays tribute to the fusion of ancient art form and modern technique. Here he celebrates humanity and the spirit of connection, posing the eternal question around humankind’s existence.

WiseTwo’s collaboration forms part of the brand’s Grande Composition, a project that brings life to the Grande Couronne through cross-cultural interpretation. Kenya is one of three African countries to take part in this collaboration alongside 20 artists from around the world including the UK, UAE, Nigeria, South Africa and Germany.

Of his artistic interpretation, WiseTwo (Bhupi Jethwa) remarks, “The Glenfiddich Grand Couronne is borne from the merging of two worlds. Similarly, my work is a collision of cultures and influences. Through this creative process I discovered synergy between the craftmanship of fine whisky and art. It is my hope that through this piece, people will feel a connection to the art. That it will ignite an artistic element within each other.”

The bottle and packaging of the Grande Couronne are adorned with an ornamental gold filigree, whilst exquisite artwork reminiscent of great renaissance paintings are revealed inside the box. WiseTwo’s piece features ancient hieroglyphs and gold foiling as an interpretation of the regal filigree which adorns the Grande Couronne bottle.

WiseTwo further highlights, “As you sip the Grande Couronne, I encourage you to visualize this piece and appreciate the craftsmanship behind the whisky and my art. It is a symphony of many cultures, ideas and artists coming together”.

As for the collaboration with WiseTwo and Glenfiddich, Mulunda Kombo, Glenfiddich National Brand Ambassador Kenya comments, “From the outset we knew that this required something special, because it is not every day that such an exceptional whisky gets made. We found that special quality in WiseTwo. His commitment to his craft, his quest to create pieces that ignite the human spirit and above all his diversity have made for a collaboration that elevates the Grande Couronne experience even further”. 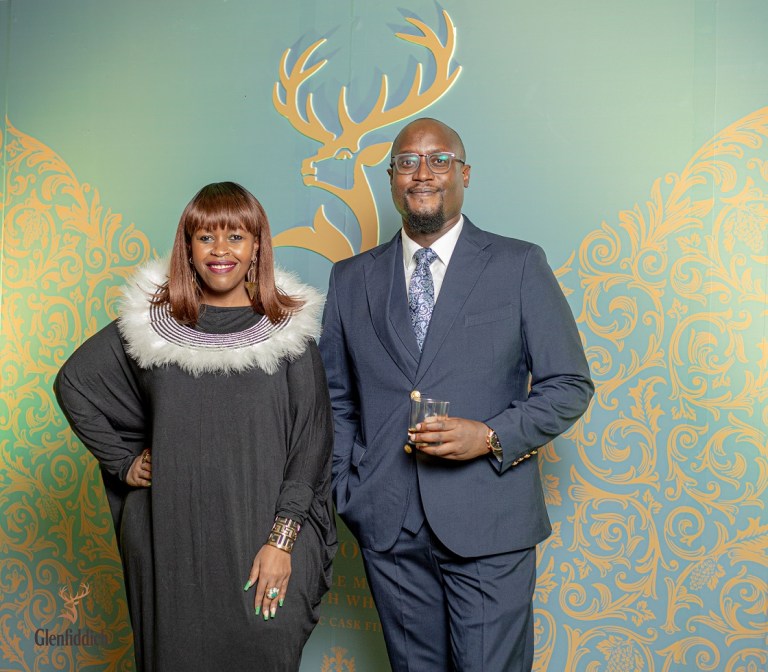 Glenfiddich Malt Master, Brian Kinsman, commented: “The Grand Series perfectly encapsulates Glenfiddich’s spirit of innovation and our ability to experiment with aged liquid and intriguing finishes. Grande Couronne is the latest to exemplify that approach. It is the only Glenfiddich single malt that has matured in American and European oak casks and finished in rare French Cognac casks. The length of the finish, two years, is highly unusual and adds extra layers of sweet toasted oak and velvety aromas of café crème, brown sugar and soft spice.”

The Glenfiddich Grand Series is a beautifully disruptive series of single malts that oozes opulence and is designed to elevate occasions and celebratory moments in a whole new way. Grande Couronne is the latest addition to the series, which includes Glenfiddich Grand Cru, aged for 23 years in American and European Oak casks and then finessed in French cuvée oak casks, launched in 2020 and Glenfiddich Gran Reserva, patiently mellowed for 21 years in bourbon casks before a final flourish in Caribbean rum casks, launched in 2018.

Kariuki Mukii, William Grant & Sons, Prestige On-Trade Manager East Africa reaffirms “We are the World’s Most Awarded Single Malt Whisky because of our commitment to innovation and our ability to bring cultures together. That Kenya has been featured in the Grande Composition is a testament to the popularity and preference of the brand amongst Kenyan whisky drinkers. We wanted to celebrate this through the collaboration with WiseTwo.”

ONE TRIBE IS BACK

Hero Bar in Nairobi Ranks 70th As The...

KBL Unveils Festive Campaign With a Toast To...

ONE TRIBE IS BACK

Mastercard Taste of Nairobi: Indulge in The Capital’s...

The best vineyards for every taste and budget...

Very energetic blog, I loved that bit. Will there be a part 2?

This is my first time go to see at here and i am genuinely pleassant to read all at
alone place.