Rémy Martin Partners with King Kaka For a 2020 Inspirational Campaign

Premium cognac brand Rémy Martin is recognising and showcasing people with extraordinary achievements, and revealing the great teams behind them, in the unveiling of its most recent global communication campaign ‘TEAM UP FOR EXCELLENCE’.

The new campaign, which reflects Rémy Martin’s values of authenticity, audacity and generosity, speaks to the heart of togetherness, an essential quality relevant now more than ever in the current environment.

The tagline “Behind every individual success is a collective story” – something that the brand believes is true not only to their history, but also to those they choose to partner. Locally, the campaign Is building on the successful partnership fostered during the first One Life/ Live Them campaign, which cemented King Kaka as the Rémy Martin One Life/ Live Them brand ambassador. Through its history of family, partners and collective success, Rémy Martin is again joining forces with award winning rapper King Kaka in this ‘celebration of excellence’ campaign.

But this time round, the collaboration will reveal a more personal narrative and introduce the people or ‘team’ behind Kaka’s journey to success. Rémy Martin believes strongly in this inspiration as each individual looks for ways in which they can thrive in disruptive times. 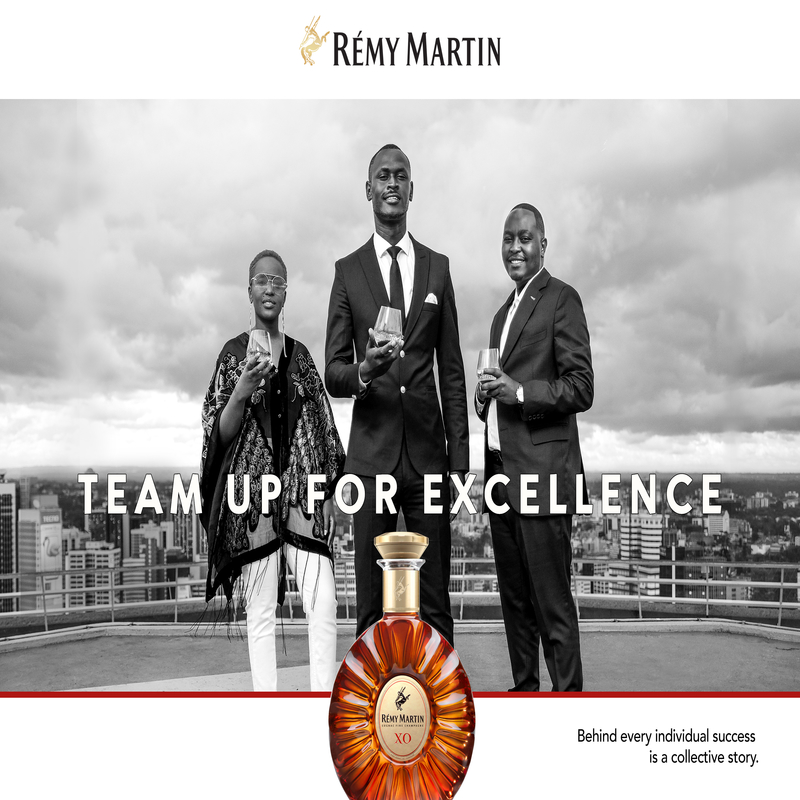 A great admirer of Kaka’s innovative style and savoir faire (one’s ability to adapt and know what to do in any situation), Rémy Martin believes he is the ideal embodiment of Team Up For Excellence . And like Rémy Martin – a brand which is a combination of talents from their cellar masters, distillers and winemakers – King Kaka is only who he is today because of the people that have shared his hustle with him.

“Success is greater when achieved together,” says Kaka, “and there are two special people in my life who’ve not only supported me through every up and down, but also shared their own unique talents and positivity, helping me grow into the artist I am right now.”

His manager Dennis Njenga, who as Kaka explains, “has grown together with him and has been able to shape King Kaka from the beginning. Elevating him to success by building the King Kaka brand, transforming him into an entrepreneur in the music industry.”

Femi One, the first female rapper to  signed to his record label, of whom Kaka says, “always keeps me on my toes musically – I learn a lot from her every day and together we are consistently changing the game and trying to make women stand out in the rap game.”

“Rémy Martin’s trust in the power of time and people’s talents has made the brand what it is,” says Alvin Saal, African Marketing Manager for Rémy Martin, “and we’ve launched this campaign to pay homage to everyone who’s played a role in our collective success.”

“I’m proud to say that we’ve teamed up with King Kaka again,” he continues, “as I can only see excellence in our future, thanks to this collaboration. Together our campaign is designed to inspire others to look at those who have helped them on their journey. It is a celebration of hope”.

Launched globally at the end of last year, at an illustrious and star-studded event at the historic Chateau de Versailles in France, “TEAM UP FOR EXCELLENCE” celebrates excellence and the conviction that every accomplishment is shaped by collaboration.  The new campaign has also seen the reveal of two films. Both directed by Brazilian director Vellas, the films draw on the rich, nearly 300-year history of Rémy Martin, but at the very same time remain entirely contemporary.

This Team Up For Excellence Campaign was shot prior to the pandemic of COVID19. We encourage all drinkers to enjoy Rémy Martin responsibly whilst following government guidelines. Not for sale or consumption to persons under the age of 18 years old.